It might have been sometime last fall when I came to the realization that I was thinking about “mercy.” It was during the time when Germany was receiving the greatest influx of Syrian refugees. It was the time when our presidential political campaign became a nightly news story. It was a time that I hoped would be the end of senseless shootings and bombings and activities that brought about great fear and anxiety, leading to increased blame and shadowed hatred for people that are different. But it was not the end and these activities continue.

So, you might say that mercy has been on my heart for months.

And then, in March, something happened in my prayer life and I began to realize that I was praying for mercy, almost without ceasing. It began as I felt the word mercy rising up within me. And then, I began praying the “Jesus Prayer,” an ancient prayer that comes to us from the Greek Orthodox tradition and uses over and over again these simple phrases:

“Lord Jesus Christ, son of God, have mercy on me, a sinner.”

I have known about this prayer since, 1983 when I first started seminary and I discovered the origin of the prayer. It is a prayer that could be prayed over and over until the repetitions sink down into the soul and the prayer is continuous. Given to pilgrims, in the ancient days of the church, the prayer could be prayed continuously along the journey.

I was fascinated by the history and stories that surround this prayer and I decided that maybe I would give the prayer a try. I remember trying to pray this prayer over and over again, but I would soon be distracted and after awhile I stopped trying to keep it before me all the time. At various times in my life I have encountered the prayer again and would try to put it into practice and then again I would be distracted and would abandon the practice.

“Lord Jesus Christ, son of God, have mercy on me, a sinner.”

For several days I was concerned. And then, one morning in May I realized that I was praying not only for myself, but also on behalf of this world and I was no longer praying the whole prayer, but I had shortened it to:

The word mercy became the word for me. And it didn’t take me long to realize that I was, that I am praying for mercy for this world.

Well, I am not sure what anyone else would do, but I decided to spend 36 hours praying the “Jesus Prayer” at St. Meinrad monastery, with a bunch of monks and nuns and other assorted people, in Indiana, in June.

Praying the Jesus Prayer in the shadow of this beautiful window in the main sanctuary at St. Meinrad’s.  This space is also the place for the prayers of the monks praying the Daily Offices–prayers prayed five times a day.

It was a powerful experience learning about this prayer and thinking about what it means to pray this prayer, all the time, because that is what was meant to happen—that this short prayer could be prayed over and over again until it sinks down into the soul and the soul prays it without effort and without ceasing.

For me, the highlight of the 36-hour retreat was praying the Jesus Prayer 100 times in succession.  Twenty-eight of us were gathered in a simple, profoundly beautiful chapel, praying aloud the words of this ancient prayer:

Lord Jesus Christ, son of God, have mercy on me.

Twenty-eight voices could be heard praying this prayer, asking for mercy. For me it was powerful.

What was interesting was that, over the course of this retreat, we were never able to come to a consensus on the meaning of mercy. For some it simply meant God’s forgiveness. For others it meant something more, but not defined. For me, I found myself again thinking about mercy, longing for mercy, praying for mercy, all with the image of the world and the people of the world in my mind.

In the last few moments of the retreat, as we were talking about how my heart stops on the word mercy, one monk wisely asked a question: “Could it be possible that mercy includes everything that we have said, but also could it be the space that God gives us to remember that we are loved, we are good, and we are created to grow deeper in love with God and each other.”

Something leaped inside of me. That is indeed what I am praying for, for this world, when my heart, my soul stops on the word mercy. I am praying for God to give us the space to remember that we are better than we think we are, that we are really loving, compassionate, forgiving people because that is how God created us.

So, I have been think about this notion all this week and one morning as I was walking to the Parish House I was reminded of a time of mercy in my life. It happened when I was Associate pastor at First United Methodist in Clarksburg, WV, in the summer of 1991. That was the time I became a mother.

In my early twenties, I was told that I would have difficulty getting pregnant because when my mother was pregnant with me she took DES, a drug that was meant to prevent miscarriages. She had had a miscarriage prior to getting pregnant with me. One of the side effects from that drug was that often infertility occurred in the female offspring and I did indeed struggle with infertility.

However, due to advancement in modern drugs and God’s mercy, Ethan, our first child was born in June of 1991.

I have never forgotten that summer or the things I thought about as I adjusted to being a new mother and he adjusted to being alive. His was not an easy birth, which I remind him of quite often—23 hours in labor, followed by a C-section–but on the day that he was born I was filled with more love than I could ever imagine one person having for another. I never knew that I could love anyone so deeply, so completely.

All that summer I kept thinking to myself, this child is going to make me a better person and he did, along with a lot of help from his sister and brother who came along later. Because of Ethan’s birth I became: More sensitive, more compassionate, more thoughtful, more patient, more forgiving, more loving, more playful, more inquisitive, more creative, more prayerful, more trusting, more merciful.

And in the midst of those discoveries, that developing into a better person, there was the sense that God understood it all.

You see, I don’t think that God sees any of us any differently when we are born.   God doesn’t see us as black or white or rich or poor or Christian or Jewish or Muslim or nothing. I don’t think God see us as American or European or African or Asian, but God sees us as someone who can enhance who God is already, Love. We are all created with the potential to magnify the glory and love of God.

It is a mercy that God has given us space to be more than who we are right now: More sensitive, more compassionate, more thoughtful, more patient, more loving, more forgiving, more prayerful, more trusting, more merciful.

It is a mercy that God gives us space each day of life to recognize that we do not have to be judgmental or critical or racist or think that we are better than others or our way is the only way.

It is a mercy that God gives us space to pray and hope and love and do what we can to help this world be a better place and help ourselves be better people.

It is a mercy that God is forgiving and can fill us full of love that we never realized that we are capable of.

It is a mercy that God gives space to grow and become more Christ-like.

It is a mercy that even in the midst of this chaotic, violent, judgmental, hopeless world, God has not given up on us.

So how do we offer mercy, the same mercy that God offers us?

I have a friend who is a pastor in my home conference, the Western NC Conference and I have known him since he was first ordained and was appointed to a little two point charge near where I went to college. He was single then and in his spare time sang with us in the Symphonic choir and hung out with us music majors. Often, the Rev. Dr. James Howell sends out a mass text message. One day this past week, as if in answer to my questions and thinking about mercy, his text said this:

Try all day today to look closely at people, to listen deeply. Look for the image of God, their hidden struggles, their inner beauty. Love. Be grateful.

To God be the glory! 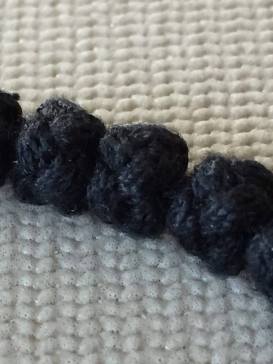 Often, the Jesus Prayer is prayed with prayer ropes.  These prayer ropes are made using a series intricate crosses that form individual knots and are put on ropes of 100, 50, or 33 knots.  The rope is designed for the pilgrim to use to pray the prayer in succession and to keep track of the repetitions of the prayer and to bring the mind back to the prayer when it is distracted.